Queen Maxima of the Netherlands donned a vibrant outfit to visit the Amsterdam Museum of Modern Art today.

The Dutch royal, 50, visited the Stedelijk Musuem, which showcases modern and contemporary art, to mark the 50th anniversary of the Kwadraat Fund, an arts foundation that funds art projects in the Netherlands.

For the occasion, Maxima opted for a creative set consisting of a blue sweater tucked into a layered midi skirt in white, red and yellow, with floral details.

The mother-of-three looked in a good mood as she defied the Amsterdam drizzle and headed for the event, which aims to connect artists with art professionals and amateurs of art.

Queen Maxima of the Netherlands, 50, visited the Stedelijk Musuem, which presents modern and contemporary art, to mark the 50th anniversary of the Kwadraat Fund, an artistic foundation funding artistic projects in the Netherlands, on the picture

Maxima came out wearing the tasteful garment, while a bodyguard gallantly handed her an umbrella.

She was wearing a dark cyan sweater that had tucked into her skirt, her long sleeves were her only blanket against the September breeze.

Her skirt was a work of art in its own right, adorned with layers and pearls in yellow, red, cyan and pink. 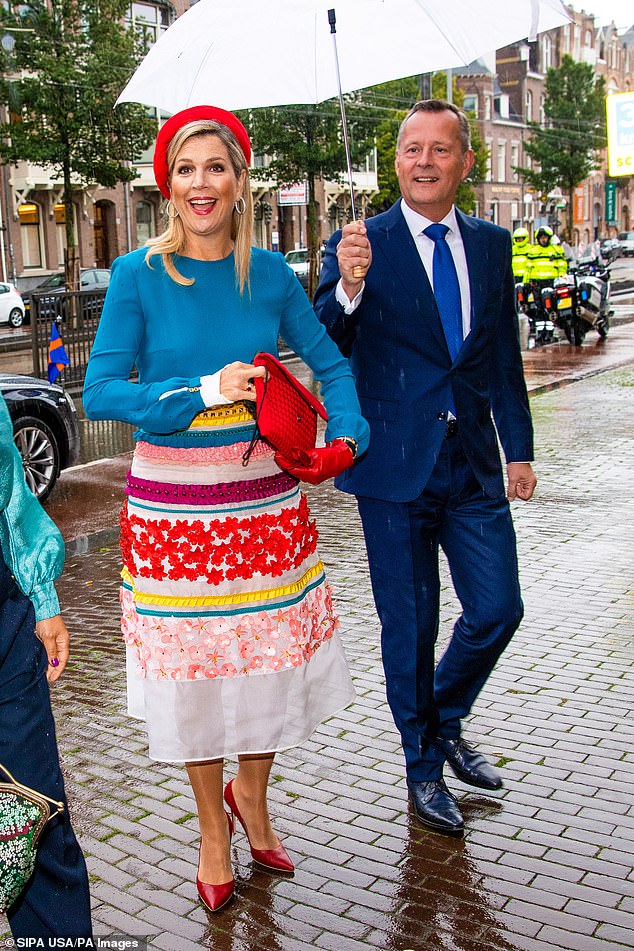 The Queen of the Netherlands lit up this rainy morning in Amsterdam with a colorful look with yellow, red, blue and purple spots, pictured

Maxima, who is known to love colorful numbers, paired the skirt and top with a red beret, matching stilettos, and recycled a red clutch she wore yesterday on another engagement.

Her blonde locks were brushed straight and tucked behind her ears under a red beret that revealed beautiful silver earrings.

The Queen of the Netherlands still wore the splint seen on her wrist in September following an injury, along with bright red gloves.

Smiling with her usual warmth, Maxima sported a bold red lip and glamorous makeup for the daytime event. 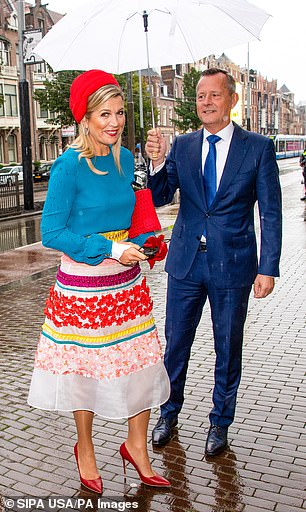 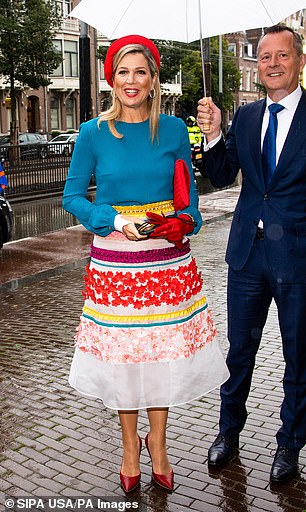 The mother-of-three defied the rain and donned a very colorful outfit for her day in Amsterdam, where she attended an event at the Museum of Modern and Contemporary Art

A touch of eye shadow and mascara and a touch of bronzer completed her look.

The Kwadraat Fund was established 50 years ago in 1971, and aims to finance artistic projects by providing interest-free loans to artists.

Since its creation, the independent foundation has funded around 1,800 projects for a total amount of nearly 6,500,000 euros. 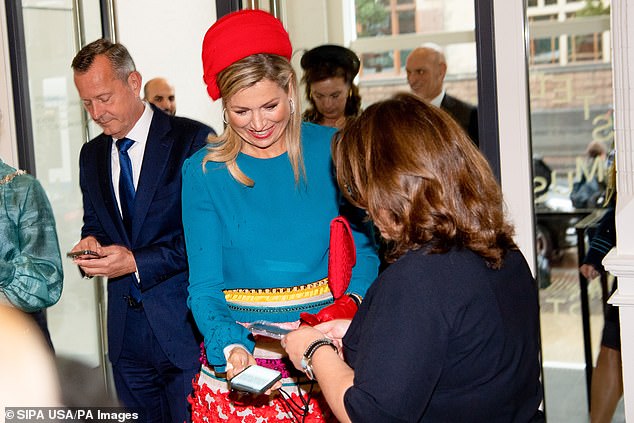 Dutiful Maxima showed her details on her phone as she entered the event at the museum today, pictured 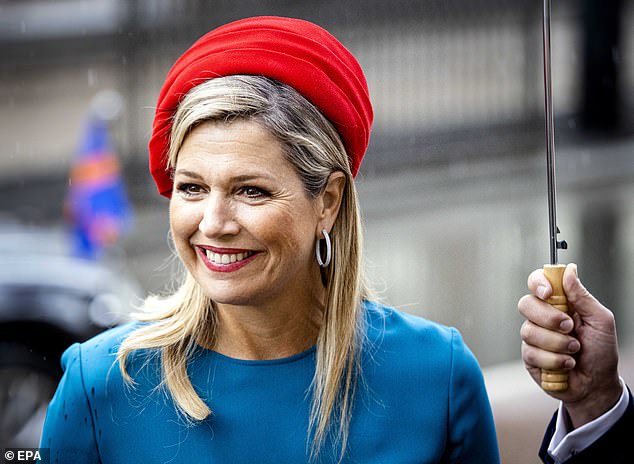 Maxima sported a touch of mascara and eye shadow, with a bold red lip. Her blonde locks were hidden under a beret style hat

The organization puts in place short-term interventions to prevent and combat petty crimes such as vandalism, shoplifting and more, and is responsible for administering sentences.

For the occasion, Maxima, a mother of three teenagers, wore an eye-catching leopard print dress with red accessories.

She looked resplendent in the flowy midi dress which had a loose fit and was cinched at the waist.

She gave the dress’s modern print a boost by choosing red accessories, crimson velvet stilettos and a matching bag.

If you purchase an independently reviewed product or service through a link on our website, Footwear News may receive an affiliate commission. Zaya Wade poses in a look that gives 90s vibes, in her latest Instagram post. The influencer shared a series of photos on Thursday showing the teenager wearing a glitzy ensemble suited to […]

Hilary Duff recently said it “feels good” to live as a mother of three with husband Matthew Koma, 33. But the 33-year-old actress appeared to be taking time for herself on Wednesday afternoon. Duff was spotted shopping with a few friends on Beverly Hills’ iconic Rodeo Drive. Mom’s day! Hilary Duff seemed to be taking […]